Malibu Boats™ is using independent data captured by experts like the team at Boating Magazine and the California Air Resources Board to prove the new Malibu Monsoon engines truly are the best inboard engines in towed watersports today. There’s a lot of misinformation out there about which brand is best, and while the numbers don’t lie, amateur testing can be misleading. It’s critical to have an engine that is reliably quieter, and cleaner with better fuel economy—all while delivering the torque you need for watersports and Malibu Monsoon line of engines does just that.

Some of us go out on the lake for peace, and some of us go out to listen to our favorite soundtrack while trying to stick our latest surf trick. Either way, everyone onboard benefits from a quieter, less obtrusive engine. Engine NVH—or noise, vibration and harshness—takes away from the overall experience of enjoying the water and can leave passengers with a worn out feeling at the end of the day. That’s why Malibu took so much time and care to ensure its Monsoon line of engines was quiet enough to enjoy a conversation while cruising down the lake, even with a fully loaded boat.

The independent crew at Boating Magazine tested noise at RPM increments of 500 with a decibel meter in the same location within each boat, and each test is run twice to ensure accuracy. At 3,500 RPM—which is common for watersports—Malibu’s line of Monsoon engines was well below the threshold that can cause hearing loss. This may not sound like a big deal, but believe it or not, other boats consistently run at noise levels that could cause hearing loss, which means every time you go out on the lake you could be sacrificing your hearing. To put this in perspective, the average bulldozer pushing a load ranges from 104 to 108 dB—the operators generally experience hearing damage—and many inboard boats are not far off these numbers.  Malibu, on the other hand, uses strategically placed acoustic foam as well as the latest direct injection technology in its Monsoon line to make engines that are a giant leap forward in the reduction of NVH, because your family deserves an engine that’s as quiet as it is powerful. 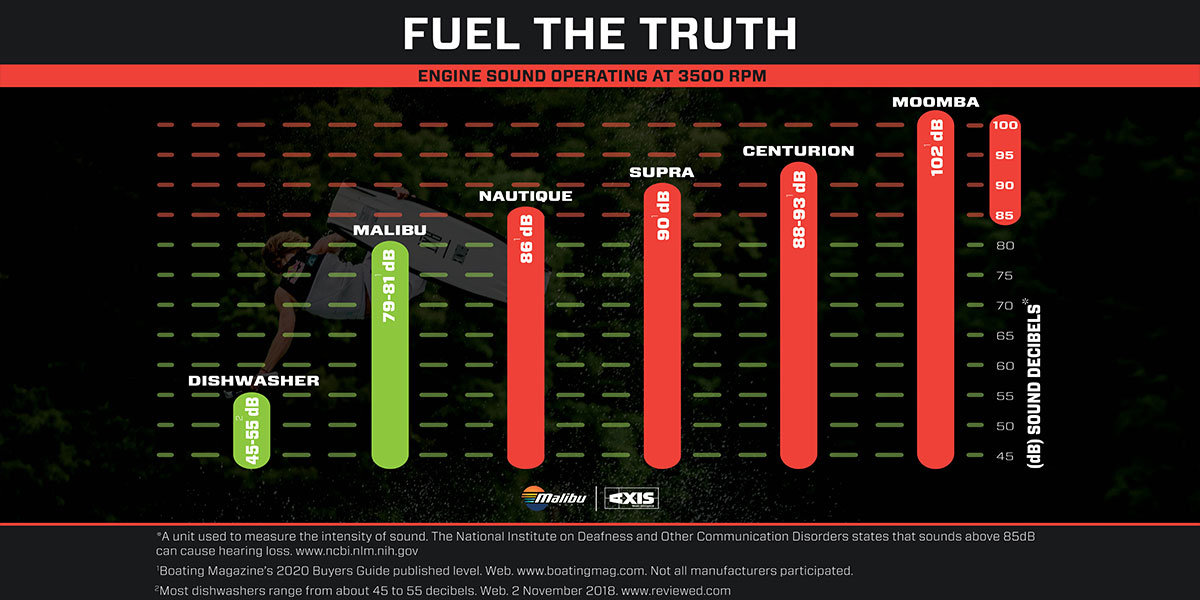 Learn more about how Malibu designed the Monsoon M5Di and M6Di engines to be the quietest in their class.