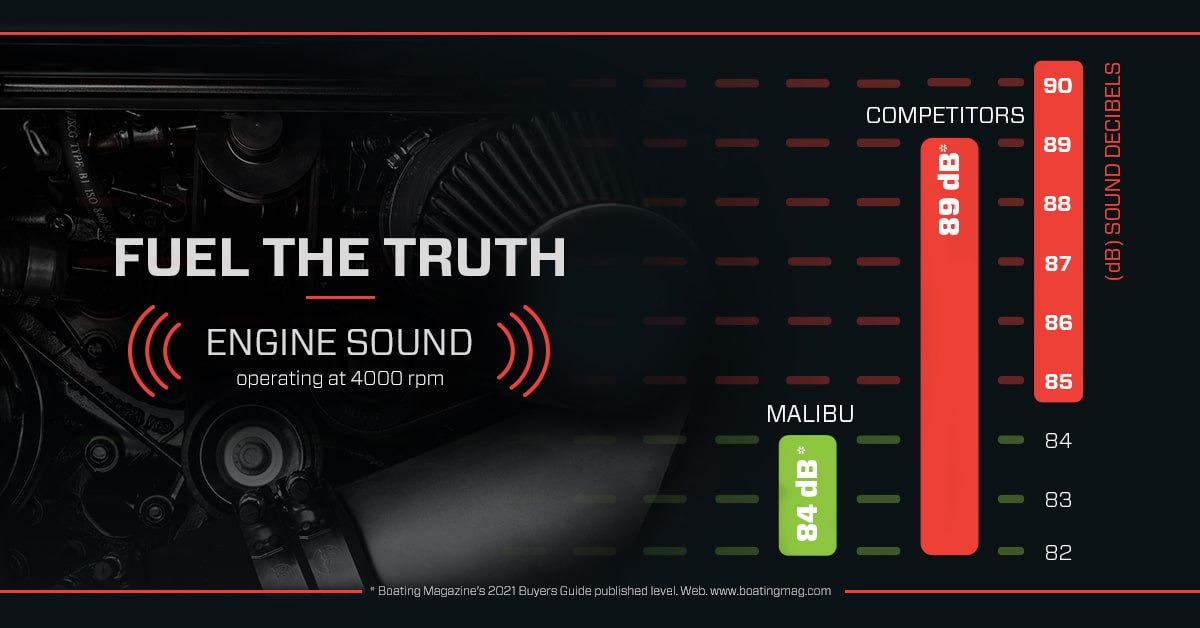 Direct injection technology is the backbone of Malibu’s Monsoon line of engines. It’s a huge part of the reason our engines produce extremely low noise levels while providing best-in-class torque and fuel economy as well as the lowest emissions the towboat world has ever seen.

Direct injection technology sends precisely-controlled amounts of fuel directly into the engine’s combustion chamber at higher compression, which makes for a more complete, clean and precise fuel burn. It’s a giant leap forward from traditional port fuel injection and it enhances the way your engine works on a foundational level that can never be re-created by fuel injection.

But we didn’t stop there.

Acoustic foam surrounds key areas of our Monsoon line of engines, isolating the noise where it should be: in the engine compartment.

Heavy-duty, cast-iron manifolds were designed by Malibu for the expressed purpose of noise reduction. They wrap completely around the cylinder heads for sound and vibration dampening your family will appreciate whether you’re idling into a cove or running down the lake.

Like the quality of our wakes, this is something that can’t be measured. But ask any Malibu owner how perfect their wakeboard wakes and surf wave are straight from the factory and you’ll know Malibu’s iconic reputation has been well earned. The same goes for the low level of noise, vibration and harshness from our Monsoon engines. NVH is an industry term that expresses the general feeling you get after being in close proximity to an engine for long periods of time. Do you want to feel exhausted or refreshed at the end of a long weekend on the water?

We know the answer. That’s why we put countless hours into the little details that would reduce NVH and make your day on the water that much more enjoyable.

How did we do all this?

Where the Magic Happens

Right now you might be asking yourself, if direct injection and engine quieting is so great, why doesn’t everyone do it? The answer is they would if they could. Malibu invested in a 70,000-square-foot facility right next to its boat building plant that is 100% dedicated to engine building. Thousands of hours went into research and development to create the best engines the inboard world has ever known. But don’t take our word for it, take a test drive and see for yourself. Like all things Malibu, The Truth is on the Water®.

Watch and see why Malibu Monsoon Engines designed a quieter engine allowing you to have full conversations while running on the water.

Learn more about how Malibu designed the Monsoon M5Di and M6Di engines to be the quietest in their class.